UTF-8 has been the predominant character encoding system for the world-wide web since 2009 and as of October 2018 accounts for over 90% of all web pages. As of October 2018, UTF-8 is not supported by Microsoft SQL Server.

SQL Server 2019 will remedy this situation, as current SQL Server community technology previews illustrate. The one- and two-byte character datatypes of SQL Server do not change; UTF-8 is implemented as a new collation, and this new option must be enabled during installation when one is setting the value for the server's default collation. Briefly, the idea behind UTF-8 is that classic 7-bit ASCII codes are not changed and are directly compatible. That is to say, a UTF-8 document containing only ASCII characters would be identical to a classic ASCII document. However, additional characters beyond ASCII are defined using 2, 3, or 4 bytes. This makes UTF-8 particularly valuable for documents which contain a small number of non-ASCII characters embedded in a largely ASCII document.

As is the case with all collations, you can assign a server default and then assign specific collations to databases, tables, columns, and individual queries. 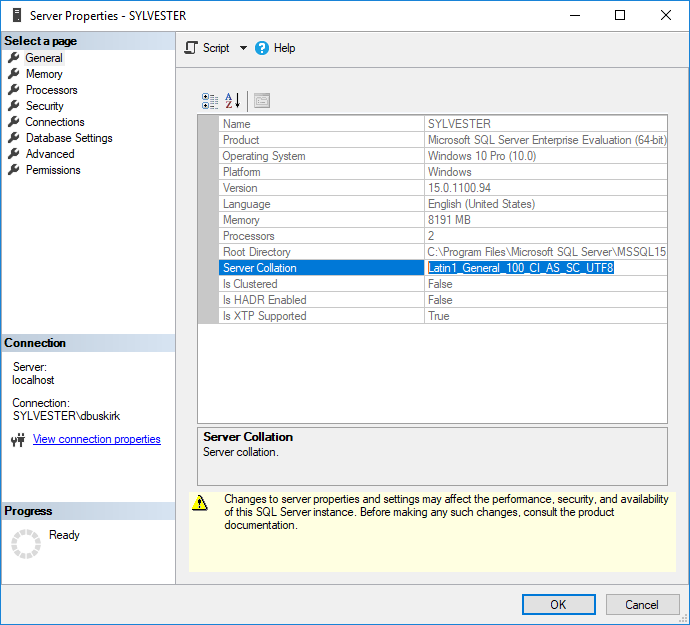 Let's start with a simple SELECT statement with a literal character string:

The most important thing to notice about this query is what's not there! There's no "N" since this string is not a two-byte-per-character Unicode string.

Now let's take a look at the savings provided by UTF-8.

DECLARE @S VARCHAR(8000) = 'These are the traditional characters for the word for ''China'': Zhong Guo '

LEN( ) gives us the number of characters in the string, 65. Expressing this string in Unicode would require 130 bytes. DATALENGTH( ) tells us that the actual number of bytes required by UTF-8 is only 69.

We do have to be a bit more careful, though, when counting characters. The classic VARCHAR declaration as the number of characters won't work. 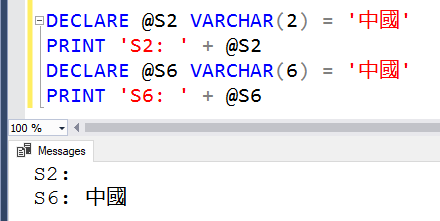