What is the Carbon Footprint of AI and Deep Learning?

Most of the recent breakthroughs in Artificial Intelligence are driven by data and computation. What is essentially missing is the energy cost. Most large AI networks require huge number of training data to ensure accuracy. However, these accuracy improvements depend on the availability of exceptionally large computational resources. The larger the computation resource, the more energy it consumes. This not only is costly financially (due to the cost of hardware, cloud compute, and electricity) but is also straining the environment, due to the carbon footprint required to fuel modern tensor processing hardware.

Considering the climate change repercussions we are facing on a daily basis, consensus is building on the need for AI research ethics to include a focus on minimizing and offsetting the carbon footprint of research. Researchers should also put energy cost in results of research papers alongside time, accuracy, etc. 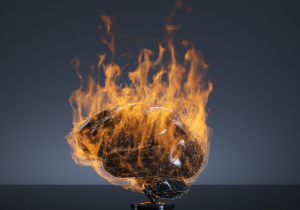 Per the paper, training AI models can emit more than 626,000 pounds of carbon dioxide equivalent--nearly five times the lifetime emissions of the average American car (and that includes the manufacture of the car itself). It is estimated that we must cut carbon emissions by half over the next decade to deter escalating rates of natural disaster. 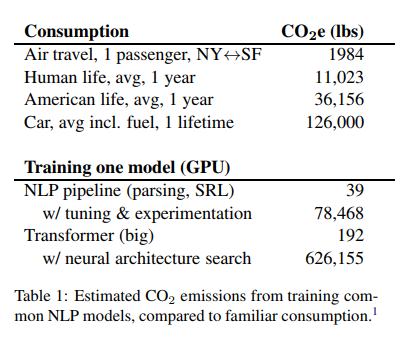 This speaks volumes about the carbon offset and brings conversation to the returns on heavy (carbon) investment of deep learning and if it is really worth the marginal improvement in predictive accuracy over cheaper, alternative methods. 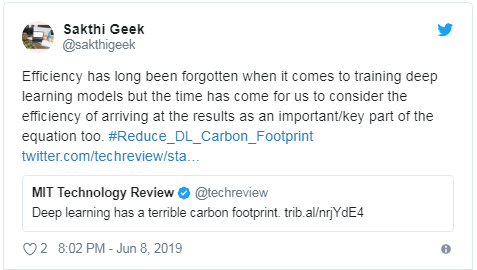 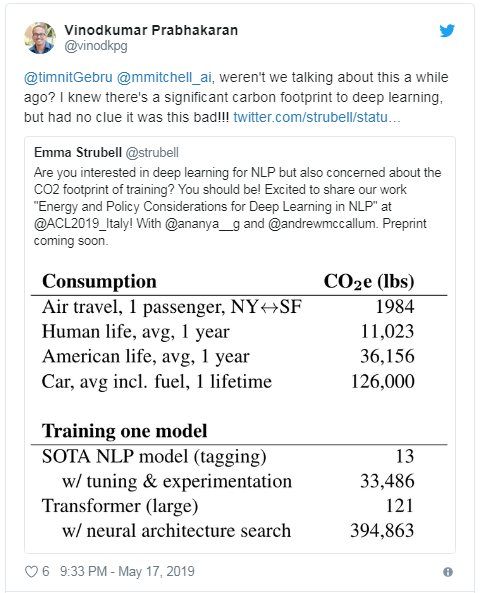 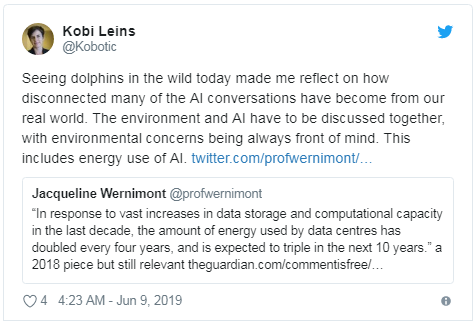 Even if some of this energy may come from renewable or carbon credit-offset resources, the high energy demands of these models are still a concern. This is because the current energy is derived from carbon-neural sources in many locations, and even when renewable energy is available, it is limited to the equipment produced to store it.

The carbon footprint of NLP models

The researchers in this paper adhere specifically to NLP models. They looked at four models, the Transformer, ELMo, BERT, and GPT-2, and trained each on a single GPU for up to a day to measure its power draw. Next, they used the number of training hours listed in the model's original papers to calculate the total energy consumed over the complete training process. This number was then converted into pounds of carbon dioxide equivalent based on the average energy mix in the US, which closely matches the energy mix used by Amazon's AWS, the largest cloud services provider.

The researchers found that environmental costs of training grew proportionally to model size. It exponentially increased when additional tuning steps were used to increase the model's final accuracy. In particular, neural architecture search had high associated costs for little performance benefit. Neural architecture search is a tuning process which tries to optimize a model by incrementally tweaking a neural network's design through exhaustive trial and error. The researchers also noted that these figures should only be considered as baseline. In practice, AI researchers mostly develop a new model from scratch or adapt an existing model to a new data set, both require many more rounds of training and tuning.

Based on their findings, the authors recommend certain proposals to heighten the awareness of this issue to the NLP community and promote mindful practice and policy:


The next step is to introduce energy costs as a standard metric, that researchers are expected to report their findings. They should also try to minimise carbon footprint by developing compute efficient training methods such as new ML algos, or new engineering tools to make existing ones more compute efficient. Above all, we need to formulate strict public policies that steer digital technologies toward speeding a clean energy transition while mitigating the risks.

Another factor which contributes to high energy consumptions are Optical neural networks which are used for most deep learning tasks. To tackle that issue, researchers and major tech companies -- including Google, IBM, and Tesla -- have developed "AI accelerators," specialized chips that improve the speed and efficiency of training and testing neural networks. However, these AI accelerators use electricity and have a theoretical minimum limit for energy consumption.

Implementing chips that use light instead of electricity

Another group of MIT researchers have developed a "photonic" chip that uses light instead of electricity, and consumes relatively little power in the process. The photonic accelerator uses more compact optical components and optical signal-processing techniques, to drastically reduce both power consumption and chip area.

Practical applications for such chips can also include reducing energy consumption in data centers.

"In response to vast increases in data storage and computational capacity in the last decade, the amount of energy used by data centers has doubled every four years, and is expected to triple in the next 10 years." 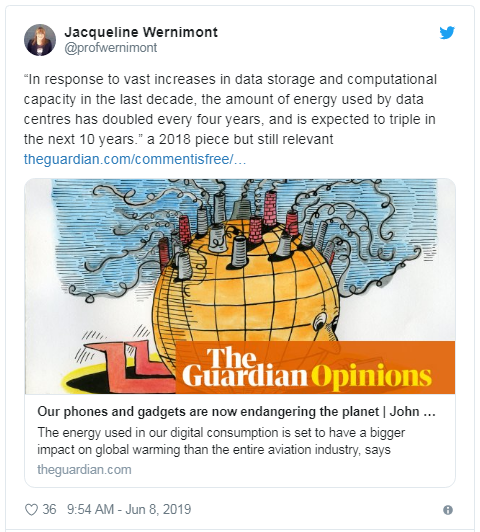 The chip could be used to process massive neural networks millions of times more efficiently than today's classical computers.

How the photonic chip works?

The researchers have given a detailed explanation of the chip's working in their research paper, "Large-Scale Optical Neural Networks Based on Photoelectric Multiplication".

The chip relies on a compact, energy efficient "optoelectronic" scheme that encodes data with optical signals, but uses "balanced homodyne detection" for matrix multiplication. This technique that produces a measurable electrical signal after calculating the product of the amplitudes (wave heights) of two optical signals.

Pulses of light encoded with information about the input and output neurons for each neural network layer -- which are needed to train the network -- flow through a single channel. Optical signals carrying the neuron and weight data fan out to grid of homodyne photodetectors. The photodetectors use the amplitude of the signals to compute an output value for each neuron. Each detector feeds an electrical output signal for each neuron into a modulator, which converts the signal back into a light pulse. That optical signal becomes the input for the next layer, and so on.

Photonic accelerators generally have an unavoidable noise in the signal. The more light that's fed into the chip, the less noise and greater accuracy. Less input light increases efficiency but negatively impacts the neural network's performance. The ideal condition is achieved when AI accelerators is measured in how many joules it takes to perform a single operation of multiplying two numbers. Traditional accelerators are measured in picojoules, or one-trillionth of a joule. Photonic accelerators measure in attojoules, which is a million times more efficient. In their simulations, the researchers found their photonic accelerator could operate with sub-attojoule efficiency.

Tech companies are the largest contributors of carbon footprint

The realization that training an AI model can produce emissions equivalent to a five cars, should make carbon footprint of artificial intelligence an important consideration for researchers and companies going forward.

UMass Amherst's Emma Strubell, one of the research team and co-author of the paper said, "I'm not against energy use in the name of advancing science, obviously, but I think we could do better in terms of considering the trade off between required energy and resulting model improvement."

"I think large tech companies that use AI throughout their products are likely the largest contributors to this type of energy use," Strubell said. "I do think that they are increasingly aware of these issues, and there are also financial incentives for them to curb energy use."

In 2016, Google's 'DeepMind' was able to reduce the energy required to cool Google Data Centers by 30%. This full-fledged AI system has features including continuous monitoring and human override.

Recently Microsoft doubled its internal carbon fee to $15 per metric ton on all carbon emissions. The funds from this higher fee will maintain Microsoft's carbon neutrality and help meet their sustainability goals. On the other hand, Microsoft is also two years into a seven-year deal--rumored to be worth over a billion dollars--to help Chevron, one of the world's largest oil companies, better extract and distribute oil. 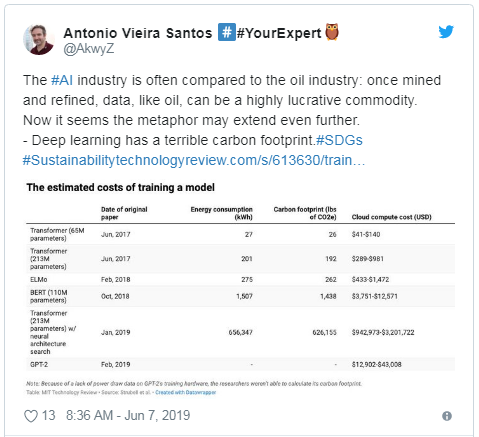 Amazon had announced that it would power data centers with 100 percent renewable energy without a dedicated timeline. Since 2018 Amazon has reportedly slowed down its efforts to use renewable energy using only 50 percent. It has also not announced any new deals to supply clean energy to its data centers since 2016, according to a report by Greenpeace, and it quietly abandoned plans for one of its last scheduled wind farms last year. In April, over 4,520 Amazon employees organized against Amazon's continued profiting from climate devastation. However, Amazon rejected all 11 shareholder proposals including the employee-led climate resolution at Annual shareholder meeting.

Both these studies' researchers illustrate the dire need to change our outlook towards building Artificial Intelligence models and chips that have an impact on the carbon footprint. However, this does not mean halting the research of AI altogether. Instead there should be an awareness of the environmental impact that training AI models might have. Which in turn can inspire researchers to develop more efficient hardware and algorithms for the future.