What do you do if you think the name "SQL Operations Studio" isn't quite exciting enough? Well, if you are Microsoft, you lead with the word "Azure", as in Azure Data Studio.

Don't be fooled by the name; The Azure Data Studio is not just for Azure databases. Not only is the Azure Data Studio (ADS) useful with all instances of SQL Server wherever they might be, but ADS is available for Windows, Linux, and the Mac. Developers will instantly recognize it as a direct descendant of VS Code, Microsoft's cross-platform alternative to the Visual Studio. The Azure Data Studio is easy to use, but make no mistake about it; it's not the Management Studio. While the core functionality is there, lots of SSMS features are missing. But there are a few new features found only in ADS that SSMS folks might envy.

One of the first of the differences of ADS to get used to is the Command Palette, a comprehensive tool that is part commandline, part menu. Although many ADS functions can be accessed through menus and buttons elsewhere, the Command Palette is the master list of ADS commands. The Command Palette can be launched from the View menu or by hitting <ctrl><shift>P.

Connecting to a Server and Executing Queries 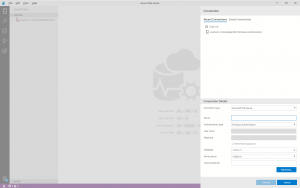 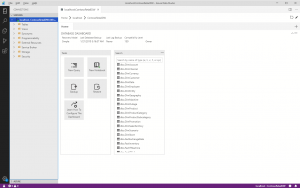 Connecting to a server brings no surprises. While writing a query one does notice, however, that the ADS implementation of intellisense is far inferior to that of SSMS. For example, it does not seem to pick up on table aliases while you are typing a query. 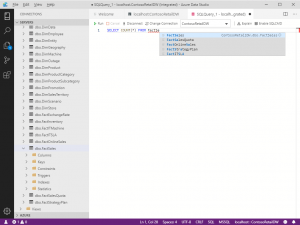 The "Explain" button in the toolbar provides an estimated execution plan, but how do you access the actual plan? Unclear until you remember to go back to the Command Palette for anything you cannot find. Once you find "Run current query with actual plan" you'll also be reminded that <ctrl>M will do the trick (same as in SSMS). While the Azure Data Studio is not intended to compete with the charts from available reporting and analytics applications, there are many times when all you want is a quick exploratory look. Importing SQL Server data into Excel or Power BI Desktop would be overkill in such cases; ADS provides simple charting capability to let you take a quick graphical glimpse of the data you have just queried. At present, the charts are too primitive and the options too limited to be of any greater use. 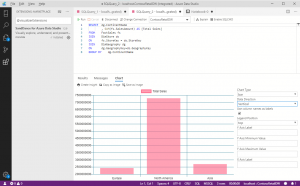 I am a big Jupyter fan; integrating notes and code into a single document solves lots of problems for me. I was therefore pleased to see that the Azure Data Studio includes a Jupyter-like notebook capability. Perhaps I was expecting too much, but the ADS notebooks are a pale reflection of real notebooks. SQL code can be stored and executed in a notebook, as can PySpark and Scala if you are evaluating the new Spark features of SQL Server 2019. Unfortunately, only the most bland features of Jupyter markup are supported. For all practical purposes you have section headings, and you have the primitive layout and formatting features of HTML available to you. The ADS notebook seems to have been designed with more features in mind, but they either aren't there or aren't working yet. Still, the ability to document queries and results all in a single document is an immense leap forward for the SQL developer. SQL Server developers and administrators who are currently using the SQL Server Management Studio have no reason to switch to the Azure Data Studio. Linux-based administrators might find it helpful, though perhaps not so much as SSMS on a Windows workstation would be. Nevertheless, the current incarnation of the Azure Data Studio seems to be a step in the right direction. And options are always good, even if sometimes the classic option still remains the best choice.